In modern societies, traffic accidents have become a major health problem. Severe injuries occur during
accidents in the high-velocity range, but also traffic accidents in the low-velocity range have become an
important economical and health-related factor. In 2015, a paper was presented about the occupant motion in the primary, secondary, and tertiary phase of a pure lateral impact. Based on this paper, a new
study with more crash tests has been conducted and is still in progress. These new tests are oblique
frontal tests to simultaneously study the motion of the occupants and of the vehicle. To the best of our
knowledge, such crash test setup is unprecedented. In this paper we show the development of the experimental setup, the capturing of the motion of the occupants and of the vehicle, as well as the analysis of the measured data, which is used for computational modelling. As for the latter, a novel 3D computational model of the human body has been implemented, which allows the calculation of muscle activities and biomechanical loads from measured kinematic data. Finally, in the medical part of the paper we show the benefits of computer modelling for the daily work of diagnosing injuries. 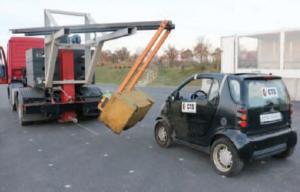