When carrying out an analysis of accidents between passenger cars and bicycles it has been assumed for
many years that the kinematics at impact correspond to those of passenger cars colliding with
pedestrians. While at the end of the 1970s and the beginning of the 1980s crashtests with bicycles that
were hit while standing still were conducted at the TU Berlin, tests with a moving bicycle remained an
exception. Taking the nearly exclusively used test setup into account, where a crash-test dummy is
initially accelerated by a sled, problems occur not only when positioning the crash-test dummy. It is not
uncommon for the crash-test dummy to topple sideways prior to the actual impact thus influencing the
kinematics or the parameters to be studied. For this reason a bicycle crash installation was developed,
where the crash-test dummy is held and accelerated from above through a harness, similar to those used
while alpine climbing. Using climbing ropes this harness is connected to a sled, which passes over the
passenger car. The crash-test dummy is released immediately prior to the impact, thus ensuring the
planned seating posture until the collision occurs. The actuation is achieved by a revolving rope, which is
moved by a motor. As the installation is mobile, it is usable for higher collision speeds of the passenger
car. The difficulty here is the synchronisation, which is currently assessed in the course of a master’s
thesis. This contribution will demonstrate the design of the installation and show results of selected tests. 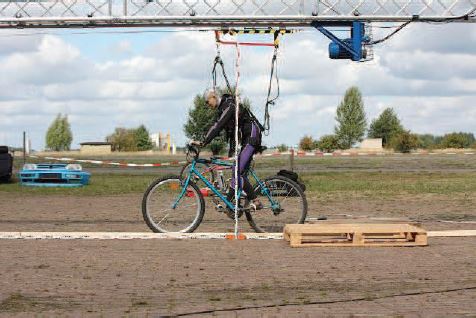 Since 2014 an amount of 19 tests with a moving bicycle and a moving passenger car were conducted and
examined. For a series of tests the bicycles were identical in construction to assess the vehicle front’s
influence on the kinematics. Firstly the parameters longitudinal and lateral throwing distance are
compared to results of previous tests with bicycles which were hit while standing still. Secondly the
values dent offset and throwing distance which are known from pedestrian accidents will be discussed.
Furthermore impacts against opened passenger car doors and collisions between two bicyclists will be
shown.