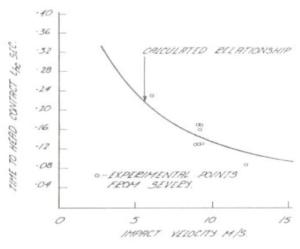 A Constant Inertial Property (CIP) pedestrian model has been applied in a Monte Carlo environment to
develop linear relationships between Vp/Vc and H/L for the cases where the struck leg is
leading, lagging or the struck leg position is unknown. Knowledge of the car speed allows
the pedestrian speed to be estimated. The case where there is no transverse offset
between primary and secondary damage locations, often incorrectly used as support for
the conclusion that the pedestrian was stationary at impact, is analysed.