To prove the possibility to park the Ferrari F430 in the garage was necessary to check the possibilities of entering the garage by the car. The request from the court was to investigate several variants of the entry option using 3D simulation. In di!erent directions were necessary determine the contact of the vehicle with the road or the garage. 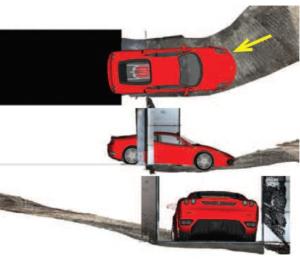 In the 2009 the area was measured by GPS total station. Because of the lack of su”cient number of points, the area was captured with laser scanner in 2017. At the time of scanning a su”cient number of photos were created. Photos were used to build a point cloud using the Agisoft. The point clouds were used to comprehensively assessment of the insurance fraud. Three di!erent polygons made from point clouds were compared in PC Crash.