EVU XXVI 2017 – 10 Investigation on cyclists turning into a main road from a stop position: crossing and left turning times

During the Congress of Harlem, which focussed among other topics on accidents involving bicycles, the
EVU Italian country group, ASAIS-EVU Italia, organised and sponsored a research on the territory with
the aim of measuring time, speed and acceleration from the stop position, for several types of bicycles
and cyclists. The reconstruction expert often needs data on the time it takes to turn into a main road and
acceleration for bicycles. This is particularly useful for urban accidents, where the first metres from the
stop position and orthogonal crossings are very important. 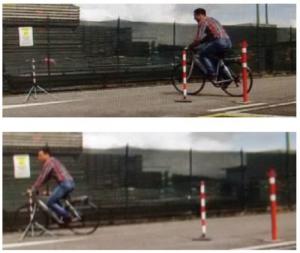 This is the reason why this study has focused on establishing a measurement procedure of the kinematic quantities which are taking place when a
cyclist is turning into a road starting from the stop position from a lateral street which is orthogonal
compared to main road. This model takes into account both the case of the cyclist going straight across
the crossing and the cyclist turning left, i.e. crossing the first lane and then entering the right lane, which
would be the furthest from the lateral street. Tests were carried out using urban streets of average width
and a measurement of movements and left turns has been taken at steps of 1, 2 and 5 metres.7 groups
(approximately 30 people), located all over the country, took care of the surveys and carried out 203 tests using different kinds of bicycles (city bike, mountain bike, foldable bikes with small wheels) and several subjects (children, women and men, of different ages). Also other variations were tested, such as
frequency of use of the bicycle and the cyclist’s physical structure (height and weight).