Data recorded by vehicle-mounted electronic control units (ECUs) are highly useful for reconstructing tra!c accidents. In this context, event data recorders (EDRs) are airbag ECU components used to log information from crash events for a period of around 5 s before a collision. Information about accelerator/brake-pedal operation is very useful for understanding pre-crash driver actions, but the
accuracy of EDR speed data must be checked in this regard. Such data are unlikely to reflect the actual speed during brake-related skidding, for example, because they are determined from the rotational speed of the drive train. Therefore, it is important to check the accuracy of EDR speed data in accident reconstruction. 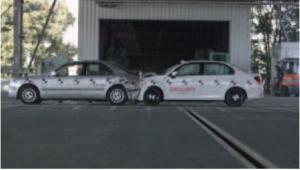 Pre-crash safety systems (PCSs) automatically apply braking in hazardous situations, and the relevant data recorded in the ECU are promising in the field of accident reconstruction. This study involved physical tests in the form of simulated rear-end collisions and the collection of recorded PCS data at the post-test stage. A Toyota Corolla was used as the test vehicle and equipped with a Toyota Safety Sense C PCS, which provided single-frame data from the point at which system braking was applied, with information including vehicle speed and driver actions. The speed data produced
were highly accurate, having been collected before hard braking was applied. Checking to determine the influence of PCS automatic braking on EDR speed data showed that high accuracy was maintained. However, the EDR data provided no data about automatic PCS braking. Thus, PCS activation cannot be reliabily detected from an accident scene even if PCS activation data are present in the ECU of an antilock braking system.