A general introduction to trace evidence investigation and its application in traffic accident analysis is
presented. The application of trace evidence studies after car accidents is illustrated by two examples, a
hit-and-run case and a case where a suspect denied having driven a car during the investigated accident.
Traces recovered from a victim, a possible involved car, or a suspected driver may be very informative
on a possible relation between different items and on the way in which the recovered traces were
transferred. In addition, recovered paint and glass traces can provide information on the vehicle from
which they originated. The second case illustrates the need for close collaboration between trace
evidence and traffic accident specialists. We conclude with a short discussion on the methodology used
in trace evidence analysis. 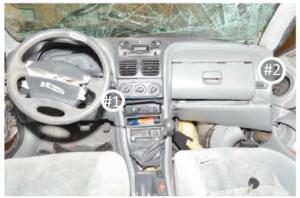