Over the last seven years the Institute of Forensic Medicine of the Charité Teaching Hospital in Berlin has carried out post mortems on the majority of people killed in road accidents. In addition it has also
conducted standardised radiological examinations of road fatalities using multi-slice computerized
tomography (MSCT). Over more or less the same time the police in Berlin has been recording serious
accidents with as much thoroughness as is usually reserved for crime scenes. When it comes to fatal
accidents specially trained police officers are often supported by expert accident investigators. This has
led both to collecting comprehensive accident data and related information regarding injuries and to
establishing correlations. 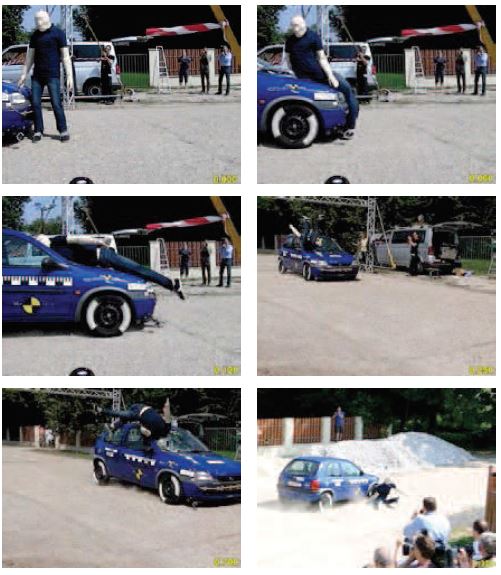 These findings have been used to improve the anthropomorphic test dummy
(ATD). Engineering Consultants Priester & Weyde, Germany, had developed the first two ATD prototypes which can be used in crash tests to reproduce realistic damage to vehicles. The new version allows damage to occur also on the dummy which can provide insights into expected injuries on pedestrians and in future perhaps even help determine injury probabilities. This new version of the ATD has already been used in several crash tests, some of which reconstructing real accidents. Crashtest-Service.com of the University of Zilina in Slovakia and the Police in the Netherlands were amongst those who cooperated in carrying out some of these reconstructions using the new version ATD. This paper will be split into three parts: First some of the crash tests results will be provided, then the current status of ATD development will be presented and lastly some medical details regarding CT findings of fatally injured road users which have had considerable bearing on the development of the ATD will be discussed.However, the main focus of the paper will be on the technical development and use of the ATD as a surrogate for pedestrians and cyclists in full-scale crash tests.