In 1981, the first collaborative crash tests were carried out by AXA and DEKRA which were aimed at
clarifying certain issues in connection with putting together expert reports. In order to be able to find
helpful answers to topical questions that experts might have, it is vital to develop existing test methods
further. This is the only way to ensure that road traffic accidents in their entire complexity can be
reconstructed in crash tests. In addition, findings generated during the tests became increasingly
detailed. Just the same as the test methods, the vehicles (passenger cars and bicycles) have also evolved
which means that today, different results can and must be achieved compared with 30 years ago.
Although parameters such as throw distances of cyclists and the damage inflicted on the passenger car
are still of interest today, and new findings are generated on a continuous basis, it was found that other
parameters, such as throw distances of bicycles, have to be treated with caution for reconstruction
purposes. 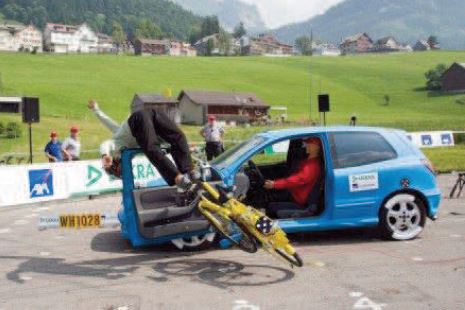