This study treats two series of crash tests by the EVU Switzerland, in which the EDR inside the airbag
control modul of three Toyota Aygo was read out and compared to the UDS data. Three Citroën C5 served as collision partners. All vehicles were thereby employed for two tests (head-to-tail collision, head and tail respectively). In the tests with the Citroën C5 as the pushing vehicle, the collision velocity was set at 20 km/h. In the tests with the Toyota Aygo as pushing vehicle, the collision velocity was set at 40km/h. The crash data was recorded with an UDS. The test vehicles were measured before and after the crash with a Faro laser scanner by DTC AG. The scan data was subsequently edited into 3D-models.
In four tests with the Toyota Aygo, no airbags were deployed. However, collision data (Crash Pulse) in
the airbag control modul was recorded in these tests. This data features a good correlation to the comparative data of the UDS. In two tests with the same vehicle (Toyota Aygo), the airbags were deployed in the first test. For this vehicle, no data was saved in the EDR in both tests. 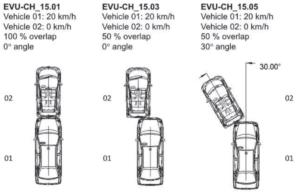