Professional community of traffic accident experts have lack of information about the general behaviour
of autonomous braking systems. Real testing of different systems is necessary. For testing procedures
eighteen real-life cases of pedestrian hit by the front end of passenger vehicles were extracted from
Zedatu database. Cases have been reconstructed to obtain detailed model situations for testing. Simulations of accidents have been made in PC Crash 10.0 using a multibody object and a mesh model of
vehicles. The article is a follow-up on the study dealing with testing and examining of the activation of
assistance systems (ADAS) in passenger motor vehicles. The active ones. The article follows Vertal
P. EVU 2015 article [1].
Conducted testing scenarios were built on the basis of the reconstructed accidents with the new Subaru
Outback 2016 and Volvo V40CC. The fundamental differences between Volvo and Subaru is in hardware
settings. Volvo used for pedestrian detection system composed from mono camera + radar + lidar.
Subaru used for pedestrian detection system composed only from stereo cameras. The movement of
the pedestrian dummy was driven by the autonomous ultraflat overrunable robot (UFO) made by DSD
company. UFO was designed for experimental ADAS testing and synchronized with cars motion is by
the D-GPS. Before the tests procedures the pedestrian dummy was evaluated in anechoic room to gain
required radar reflection properties which would be the same as those of a human body.
The paper is focused to comparison of the activation conditions of pedestrian detection systems in the
new Subaru Outback and Volvo V40CC. From the perspective of traffic accident experts on following
problems is study focused:
• In what speeds the system can prevent or reduce the risk of an accident?
• What type of pedestrian motion can system recognize?
• What period of time prior to the collision situation the system is warning the driver?
• How is the deceleration (lag time) of the vehicle during autonomous braking?
• Is it possible to read out CDR/EDR data from memory after system intervention? 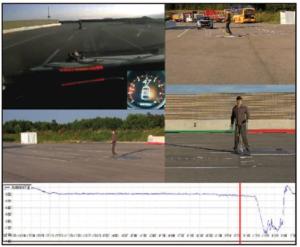