Thanks to the continuous improvement of the system and to the increasing number of the supported
vehicles, the usage of the Bosch CDR (Crash Data Retrieval) in vehicle accident reconstruction is an
increasingly attractive perspective. However, progresses still have to be done. Currently, assuming that
the vehicle of interest is CDR-compatible, provided data could not be used as they are, and a reliability
check is mandatory. Despite all this, in the event of a positive response, CDR could give meaningful
assistance in the analyses of an actual accident. In this paper, such favorable case is discussed.
A severe crash, where almost ten vehicles have been involved, proved itself as very tricky to solve.
Prosperously, an arduous investigation shown that reliable data could be obtained through the CDR
system. The present work discusses the analysis that have been performed in order to validate the
CDR data, and treats the exploitation of such information for the resolution of the case. Moreover, an
investigation of the case with the PC-Crash software is proposed, as well as a comparison between
the two methodologies. Finally, a perspective of the CDR applications in a near future is provided. 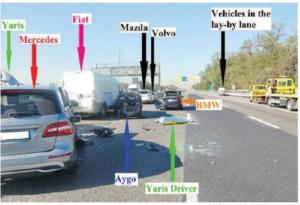