Almost all aspects of traffic safety are rooted in human behavior within the overall traffic system. During
all stages of life, this behavior is continuously formed and can be influenced in different ways. One possible approach is to teach the risks of becoming involved in a traffic accident and measures to avoid this.
In Germany, at present, there are several mechanisms to educate specific age groups. However, there
is not yet a program to raise the awareness of teenagers at the age of 13 to 17 for traffic safety. The
target of this paper is to define a new method that uses knowledge generated from real accident data
(recorded in police reports and expert evidence) to sensitize young people for the hazards in road traffic.
This method is applicable for nationwide assignments and promises to have a major impact on society.
The new psychological approach within this study is the confrontation of students with accidents in their
direct and daily environment. Therefore, the police reported accident data of the federal state of Saxony
(Germany) including the geographical references will be analyzed for each participating secondary
school. The resulting dataset will be submitted to the students who will conduct single case analyses
taking into regard all accidents that happened in their school’s surroundings. By using a software developed by Fraunhofer IVI and performing major tasks with regard to traffic safety, the students will start to comprehend real world accidents.
This new educational approach helps targeting a specific group of young people in order to increase
traffic safety in the society as a whole – by using real world accidents that happened in the target group’s
daily environment. 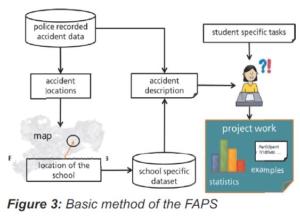 This paper will review a pilot project called Fraunhofer-IVI-Accident-Prevention-School (FAPS), which
was executed in February 2016 in Dresden (Germany). The study confronted nine students of the MANOS secondary school in Dresden with accidents around their school, based on the very large dataset of the police in Saxony. The students had to conduct several major tasks themselves and had to discuss their results with the police. First evaluations show that the impact on the students of this confrontation with real world accidents in their daily environment was very high even one month after the project.
This paper will evaluate the impact of this traffic safety measure and will give an outlook on how it could
be implemented nationwide. Moreover, it will discuss the added value of incorporating expert evidence
from detailed reconstructions.