The Experts called to reconstruct a vehicle accident usually don’t have the chance to survey the scene
in the immediacy of the crash. Therefore, the accident analysis must be performed upon the available
information, which often consist in a mere set of sparse pictures of the scene, not compliant with the
requirements of photogrammetric techniques. Notwithstanding, these pictures could however be translated in measurable quantities. Provided that a laser scanner survey of the scene is available, relatively new computer-vision techniques allow to color the laser scanner point-cloud according to the available pictures. The color information is consequently translated into metrical information on the point-cloud. 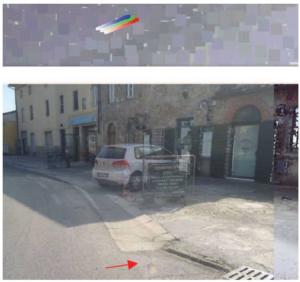 In the present work, the reliability of this approach has been proved by means of several tests, where
the colorization has been carried-out for different camera positions. Furthermore, guidelines for an
aware usage of these techniques has been provided.