This work evaluates the influence of tyre parameters on the dynamics of vehicles. This
paper investigates the effect of the following tyre parameters: low air pressure, different
tyre speed limits and old tyres. The braking efficiency and stability during emergency
braking were tested with different tyres assembled on the same axle.
These evaluations are intended to help in the reconstruction of accidents where problems
with the stability of a vehicle were apparent but no visual tyre problem was found.
Vehicle and tyre manufactures are working on the improvement of vehicle dynamics and
safety. But, due to maintenance cost, a large volume of vehicles use the road with faulty
tyres, causing conditions that significantly change the properties of the dynamics and
stability of these vehicles.
In this evaluation five different vehicles where used. The vehicles were tested and the
values of braking and road holding coefficient were measured on three different road
surfaces and on three different dynamometers. The examination was repeated as follows:
1. Each of the vehicles with the same tyres but with air pressures of: 32 psi, 25 psi, 20
psi and 15 psi.
2. The same vehicles and the same above conditions, but with tyres of different ages
mounted on the same axle.
3. The same vehicles and the same above conditions, but with tyres of different speed
limit mounted on the same axle. 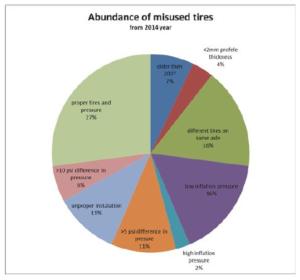