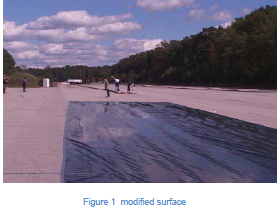 from the overall distance that a pedestrian is thrown as a result of a vehicle-pedestrian impact. (Searle, SAE #831622 and SAE #930659). The formulae were derived for use on typical road surfaces, such as asphalt, concrete, and grass. Significant testing has been done to validate the formulae on these normal surfaces. The current research was completed to assess if the same formulae are also applicable to lower-friction surfaces, e.g. snow, ice.

Test dummies were impacted by automobiles or launched from a ramp in order to simulate the airborne trajectory of a vehicle-pedestrian collision. Speeds were measured with a radar unit and/or the analysis of high speed video. The overall distance traveled by the dummy from impact/launch to final rest was measured. A calculated friction value for the overall throw distance was based upon the known speed and distance and a known or approximated angle of takeoff. A measured friction value was obtained by dragging the dummy on the testing surface. For reference, a human volunteer was also dragged (manually) on the testing surface. The calculated speeds were compared to the radar speeds in order to determine the accuracy of the Searle formulae on each surface. The data were also analyzed using the standard friction values (0.66, 0.70 and 0.79 as stated in the Searle papers) to determine if the standard values were appropriate for use on all surfaces. The author conducted 97 tests, thereby providing adequate sample size for various statistical analyses. It was found that the Searle formulae did provide accurate results when the measured drag factor of the pedestrian dummy, on the low friction surface, was used.