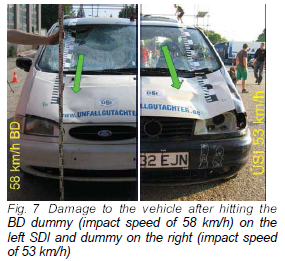 The Institute of Forensic Engineering, in cooperation with Dipl. Ing. Michael Weyde, PhD., has carried out series of crash-tests focused on analysis of relative motion of MPV vehicle and two types of dummy’s with coverage. Dependence of marginal conditions (coefficient of friction vehicle- dummy, coefficient restitution) on the impact speed has been determined by processing of individual tests (with the speed of vehicle´s impact into pedestrian ranging fromd 2(1_ u#p_ _to_ _7_3_ k_$m /h_).

The pattern of dependence of both magnitudes is similar for USI dummy and BD dummy where increase in the impact speed causes decrease in coefficient of restitution and increase in coefficient of friction vehicle – dummy. The article is dealing also with the issue of dummy´s or human body´s sliding phase after collision (mean value of dummy´s and human body´s deceleration since the moment of the first contact with road until stopping in the final position), issue of dragging the dummy by vehicle’ s movement after collision and causes of  dependence of marginal conditions (coefficient of friction vehicle – dummy  coefficient of restitution) on the impact speed.