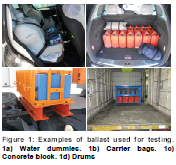 Among the many types of tests carried out at testing facilities, several involve goods vehicles.

These vehicles are usually loaded with concrete blocks as ballast in order to simulate a real load or to increase the stability of the whole vehicle.

However, these concrete blocks are not locked to the chassis and therefore a weak fastening might present safety problems in case of collision or hard braking manoeuvres. Thus, the fastening of the ballast must guarantee a minimum level of resistance. In order to establish a safe standardized fastening device, a study was performed using crash testing data as a base to validate a device through simulation and sled testing.

Based on data from a truck bollard test and PC-Crash® simulations, two fixing devices were assessed through sled tests. The first system consisted of two towropes hooked to the chassis of the vehicle. The second system was a metal structure consisting of two bars placed around the load and fixed to the chassis. A concrete block of 500 kg was placed on a structure especially developed to simulate the vehicle chassis. The test performed was based on a deceleration corridor previously defined and representative of a potential risk situation.

After the tests, the fixing device which performed best was defined in a CAE simulation to establish a minimum set of requirements, which will enable clients to use their own fixing device, but following the established requirements.