A rearview mirror’s line of sight is, while maintaining the same reflecting surface, only extendable by bending the mirror farther. Thus diminishing the size of objects in the 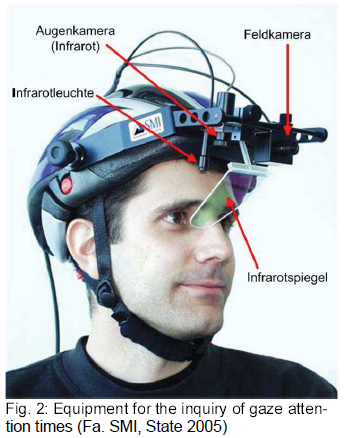 mirror greatly. Trials with probands were conducted to check, to which extent it influenced the response-time of HGV drivers to vulnerable road users (VRU), which were visible in the mirror.

While conducting the trials, with an overall of 12 probands, the distance, which a VRU has to travel parallel to the HGV to be noticed, was measured. Results showed that the difference between wideangle mirror and main mirror correlated in average with the value, which was anticipated due to reproduction scale and motion resolution of the human eye (ca. 1 angular minute). In addition a response-time has to be considered. Hence it is inferred, that recognition time in the mirror is also directly dependent on the relative speed between HGV and VRU. The higher the relative speed, the faster the VRU is being noticed.