The objective of this work is to test the potential benefit of active pedestrian protection
systems. The tests are based on real fatal accidents with passenger cars that were not
equipped with active safety systems. Tests have been conducted in order to evaluate what
the real benefit of the active safety system would be, and not to gain only a methodological
prediction. The testing procedure was the first independent testing in the world which was
based on real fatal pedestrian accidents. The aim of the tests is to evaluate the effectiveness
of the Volvo pedestrian detection system.
The in-depth accident database Zedatu contains about 3000 fatal pedestrian traffic accidents
in urban areas. Eighteen cases of pedestrians hit by the front end of a passenger vehicle
were extracted from this database. Cases covering an average traffic scenario have been
reconstructed to obtain detailed model situations for testing. Simulations of accidents have
been made in PC Crash 10.0 using a multibody object and a mesh model of vehicles. An
active safety testing scenario was built on the basis of the reconstructed accidents with a
Volvo V40 cc and a new dummy simulating a pedestrian. Before the tests the dummy was
evaluated in anechoic room to gain required radar reflection properties which would be the
same as those of a human body. The movement of the dummy was driven by the
autonomous ultraflat overrunable robot (UFO) for experimental ADAS testing and
synchronized with the Volvo’s motion by D-GPS with high accuracy. 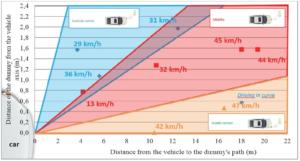